Skip to content
1,100 Miles, 40 Days and 30 Pounds of Trash: Meet Gretchen Matt Gretchen Matt has thru-hiked several trails, but none were quite like the Florida Trail. On a mission to complete the trail in 40 days and pick up garbage, we got a chance to ask her some questions about her experience. https://2fwww.wta.org/news/signpost/1-100-miles-40-days-and-30-pounds-of-trash-meet-gretchen-matt https://2fwww.wta.org/news/signpost/1-100-miles-40-days-and-30-pounds-of-trash-meet-gretchen-matt/@@download/image/image1.JPG

Gretchen Matt has thru-hiked several trails, but none were quite like the Florida Trail. On a mission to complete the trail in 40 days and pick up garbage, we got a chance to ask her some questions about her experience.

Gretchen Matt, 28, grew up in Upstate New York, but found her place here in Washington. Now living in Spokane, she’s an avid hiker, and has done several thru-hikes: the Pacific Crest Trail, the Appalachian Trail and just over a week ago, she finished the Wonderland Trail. But we got the chance to talk to her about a trail unlike anything you’ll see in Washington: the Florida Trail.

The backpacking company, Granite Gear, has been doing a series of projects called, Packing it Out, that involve picking up trash on trails. In 2015, thru-hikers picked up over 1,000 pounds of garbage from the Appalachian Trail. On the Florida Trail, Gretchen picked up 30 pounds of trash. She also hiked (and waded through) 1,100 miles in 40 days. Here’s her story. Gretchen Matt smiles for the camera during her thru-hike on the Wonderland Trail. Photo by John Zahorian.

How did you get involved in this project and why were you interested in it?

I heard about it online. I saw somebody post it on Facebook saying that Granite Gear was accepting applications, and I was planning on already hiking the Florida Trail, so I was like, “Sure, why not?”

It was going to be my third thru-hike and I felt pretty excited about the idea of giving back while I was hiking. As a hiker, you’re kind of using a lot of resources and it is almost a selfish experience. It felt nice to have a purpose while I was doing it.

What did the project entail?

Basically (Packing it Out members) were just committed to picking up trash along the trail that you were doing, and Granite Gear outfitted you. So they gave me a backpack, a bunch of sacks to store my trash and a little trash cloth to pick it up with. Then they posted on social media to raise awareness—as thru-hiking is getting so popular—about managing and keeping the trails clean.

When you came across people on the trail, were they interested in what you were doing?

I never passed anyone who saw me picking up trash. The Florida Trail is definitely a weird one, because there’s about 30 thru-hikers on it this year, so everybody knew of me because there are so few people. People called me Trash Girl, so when they would meet me they would be like, “Oh, you’re Trash Girl!” Thru-hikers already knew what I was doing, so I never really had to explain it to anyone.

What was the most exciting thing you did along the way?

A funny thing that happened was we got lost in this bog, this muddy mess. Just looking back on that, it’s type-two fun. It wasn’t fun at the time, because I was up to my knees in muck and dirt, and I was lost, but looking back, I think it was hilarious. Good times. I’d do that again.

Gretchen makes her way through the Florida Trail. Photo courtesy of Gretchen Matt.

What was your favorite part?

My favorite part of the trip was probably the very beginning and the very end. The Florida Trail is just such a different trail, compared to all the other national scenic trails. It starts in a swamp—you basically have three days of walking in the swamp, and the water could range from ankle-deep to knee-deep to waist-deep. It sounds scary but it’s actually really, really beautiful. There are really interesting plants and wildlife, and there’s nobody else around. It’s just such a weird experience. I would say that everyone needs to go backpacking in a swamp.

The last couple days, the trail ends on Navarre Beach, near Pensacola. It’s the most beautiful, white-sanded beach, and the Florida Trail was so hard in so many ways. It’s just so nice. It is a good ending.

How long did it take you?

What was the most interesting piece of trash you picked up?

There was so much interesting trash. The Florida Trail is definitely a newer trail, it’s not as matured as the Appalachian Trail or the Pacific Crest Trail. So there’s a lot of sections where to get to the next section of the trail, you have to road-walk. So maybe 400 miles of road-walk total, maybe more. But these road-walks in Florida are just littered with trash. I could not pick up all the trash. I would still be down in Florida. So each day I would focus on a specific item. One day it was lighters, and another day was lottery tickets—I got really obsessed with lottery tickets. I would pick up scratch-offs as I was walking along the road and I would look at them and never win, obviously, because they’re trash, but I had this grand scheme that I was gonna get rich.

A collection of lighters Gretchen picked up along the trail. Photo courtesy of Gretchen Matt.

Do you think differently about hiking now?

Yeah. I definitely hike faster, longer and lighter than most people. I tend to not love day-hikes anymore. I really like intense backpacking trips. I think each trip that I’ve been on has been a little bit more intense, and I’ve been pushing myself a little farther each time. I like the goals that I’m setting for myself, they’re pretty high.

Do you have any advice to people who’d like to make a difference on trail, but feel a little bit jaded?

There’s so many different answers for different emotions that people are having. I think it’s important now more than ever that there are stewards on the trail—people that are really looking out for the trail’s best interest. With the PCT getting so big each year, I think it’s super important that people are taking care of it and not turning it into a crazy, partying mess. That breaks my heart. So, I think we need more passionate thru-hikers out there.

Were there any lessons you took away from the trip?

I think one of the lessons that I consistently have taken away from thru-hiking is not to wait to do a trip. Whatever adventure you have planned, don’t wait. If you’re gonna have to do it alone, just do it, and chances are really good that you’ll meet people along the way. I’ve been so lucky on all of my trails. I’ve met the greatest people. 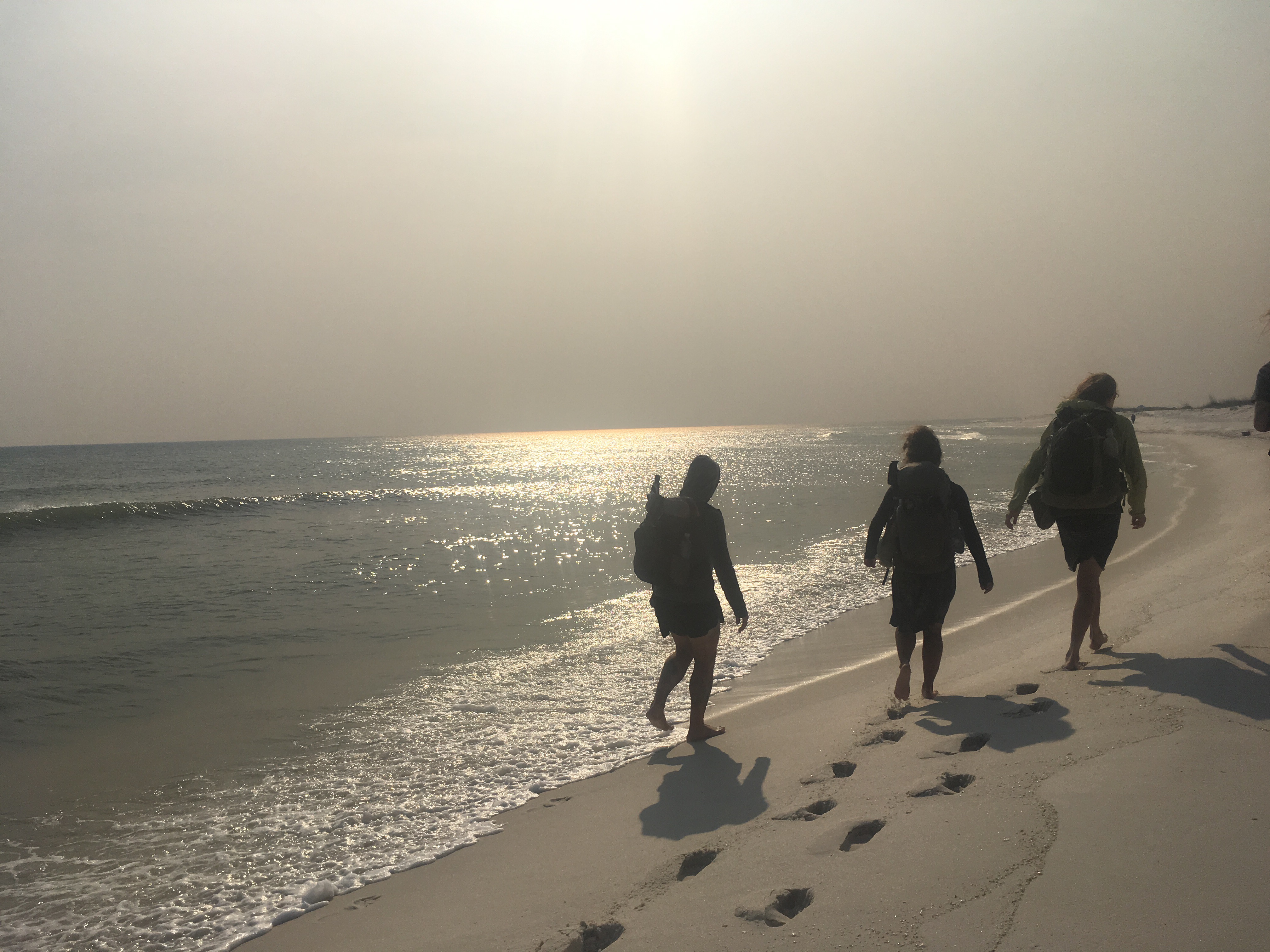 Gretchen walks along Navarre Beach, the end of trail, with friends she made along the way. Photo courtesy of Gretchen Matt.